In 2006 I decided, like so many have decided before me, to create my own set of RPG rules.

Around the same time, I was doing a lot of writing - I was in that stage that every young writer goes through where they write short stories about vampires. Mine was called Jhusmet. He was a gentleman thief. The stories were exactly as bad as you're imagining them.

These vampire stories were set in their own distinct universe - it started out as a modern fantasy version of the real world, but the more I played with the idea, the less Earth-like it became. I started toying with various “what-if”s - What if no one in the world had pets? What if wheels had simply never been invented? What if magic, instead of being a mystical, mythical thing, was an ordinary everyday part of life?

Working simultaneously on my RPG and my own world, they slowly got mixed together, and my new RPG system became specifically tied to this universe that I was creating. It grew outwards, into 3 distinct phases (medieval-style fantasy, modern fantasy and space-age sci-fi).

After a few months I shelved the RPG system (although a lot of its influences can still be felt) and instead simply worked on expanding the universe. After about a year, it got a name - All-That-Is - and I created a wiki to store my notes on.

In 2007, I started working in a map shop, which inspired me to start drawing maps of the world I was creating. 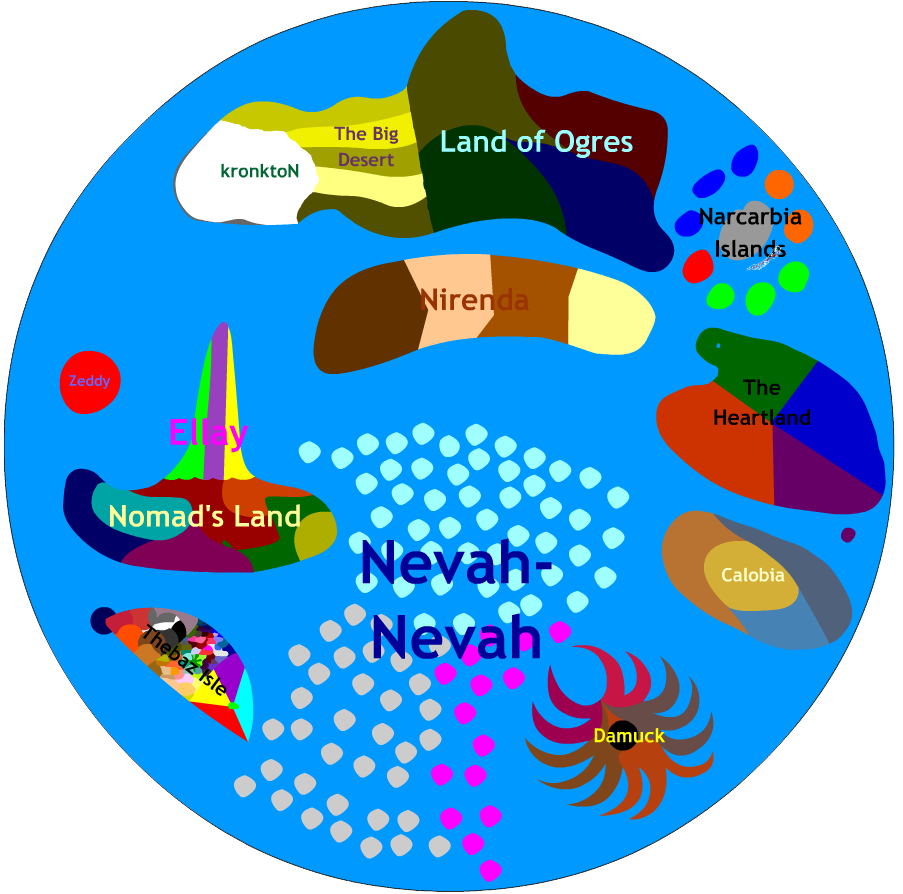 Over the last ten years, I've never stopped working on All-That-Is. I've created hundreds of characters and locations, written dozens of plots and worked on at least a handful of games for it - I'm a geofictionist, so I don't let it bother me that very little has actually been finished. I work on it for the fun of creating the world, not necessarily to lead anywhere in particular.

Oten when I’m writing about All-That-Is, (expanding the universe, starting a novel, exploring characters or ideas etc) I like to write in-universe, pretend that someone who actually lives there is putting the piece together, as if my piece of writing exists in All-That-Is itself.

It’s a really useful technique for a couple of reasons, but it’s not something that I came up with by myself. I stole it directly from the video game The Elder Scrolls III: Morrowind, which has been my single largest influence while creating All-That-Is.

The Elder Scrolls is a series of games that started in 1994 - the second game in the series, The Elder Scrolls II: Daggerfall, had this huge world in which it was set – the in-game area was around the size of Great Britain – that apparently suffered from complete and total blandness.

Creating a game area the size of a real-life country requires either ten thousand monkeys programming for ten thousand years or a program that will auto-generate locations. You tell it that a room has four walls, two doors, and a window, and the program can randomly generate an unlimited number of extremely boring rooms.

Apparently that’s what they did with Daggerfall. There were thousands of towns, which were essentially made up of the exact same buildings, slightly rearranged every time. There were 20 real quests and an infinite number of “go here and get this for me” quests. There were over 750 000 named characters you could talk to...all with the same six topics to talk about.

So when the company started work on their next game, Morrowind, they focussed on fixing these flaws. Instead of making the game as large as they could (Morrowind covers about 0.01% of the area that Daggerfall covered) their aim was to create a world where almost every city looked completely different to the next, a world of strong visual flavour. 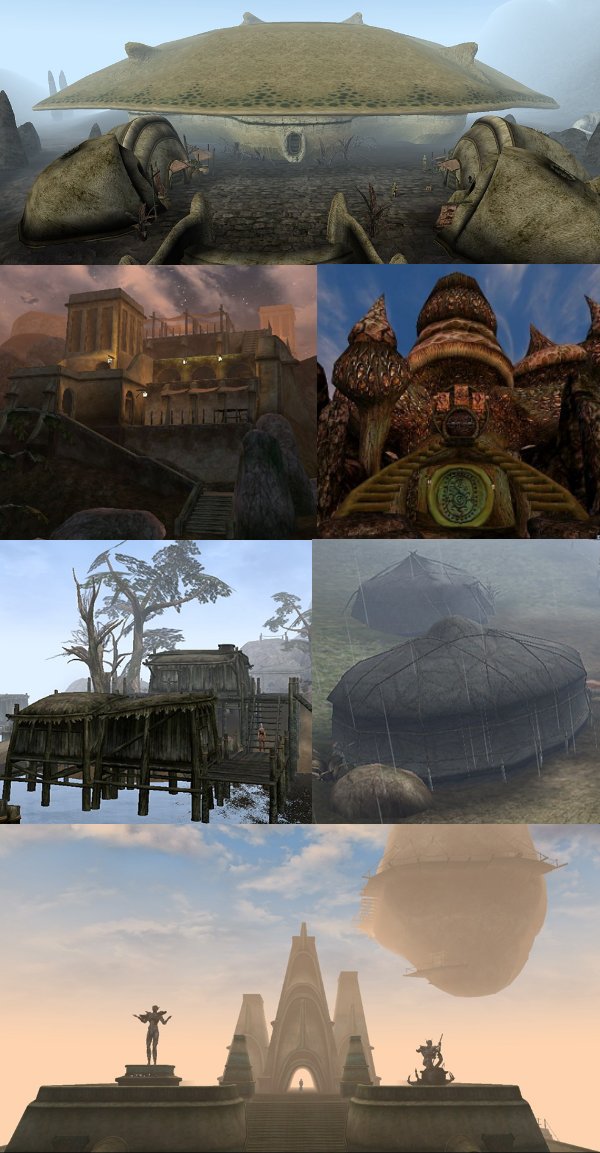 From top to bottom, left to right: Ald'ruhn, Balmora, Sadrith Mora, Ald Velothi, the Zainab Camp, Vivec. Any Morrowind die-hards could recognise almost all of them without even having to think about it.

Compare those six buildings. Each of them is not only unique and gorgeous, but their design makes complete sense, culturally and structurally. The second you step into a city containing any one of those buildings, you’re instantly aware of where you are.

This is not only useful when playing a game, but it shows how effectively they created a rich, beautiful world. (it didn’t stop at architecture – there are dozens of creatures that you can fight, almost none of which you’ll have ever seen before, and some of which have their own food chains and life cycles. They designed animals, plants, geography…Morrowind is my single favourite game, largely because it’s so visually striking.)

Throughout Morrowind, you can find, buy, sell, and (most importantly) read books. There are around 6 full novels worth of books to be read in the game, and none of them are entirely reliable.

Because they’ve been written from the point of view of characters within the world, they contain the same inaccuracies, biases and contradictions that real-world books contain: “The 36 Lessons of Vivec” (by the God-king Vivec) details his adventures throughout the land, and has to be taken with a massive grain of salt. As a writer, you can safely put anything you like into that book, and not worry about it contradicting canon – like the film 300, it’s deliberately subjective.

But more than the safety of unreliable narrators, having books written in-universe lends a sense of character to the world. If someone within the world wrote it, they must have had motivation, a purpose, a target audience. Just by having the book exist within the world, you add depth and raise a bunch of questions with interesting answers.

For example, The Traveller’s Guide to All-That-Is is a book that Travellers (the name used for “Adventurers” in All-That-Is) can take with them anywhere, with a rough overview of all that they need to know. It contains a bit about each of the different races in the world, the different countries, other travellers that they can expect to meet and band with, handy spells to learn, weapons to buy, different deities and their worshipper’s customs, etc etc.

Some day, I plan to make The Traveller's Guide to All-That-Is as a player's handbook of sort. It'll be mostly written in-universe, with occasional sections detailing stats and systems, etc.

Despite my taste for writing information in-universe, I've put together some posts that are written...out-of-universe? Normally? Writing in-universe is great if you want to set a mood, or build character, or create depth and flavour, but it’s not ideal for concisely sharing information.

The biggest problem I’ve found with it is that you can’t explain concepts that don’t exist – for example, in All-That-Is, the wheel was never invented, and no one has any reason to understand the concept of a wheel. Try explaining that while writing as an in-universe character.

Another problem (for me, anyway) is that I sometimes get distracted by writing about the fictional author of the piece I'm trying to write. The original plan for my 2007 NaNoWriMo novel was to rewrite The Wizard of Oz (the original has fallen into the public domain) as a novel that existed in All-That-Is, called The Vizard of Az.

The original Wizard of Oz was written by Frank L. Baum, and was so popular that he wrote a number of Oz books – The Marvellous Land of Oz, Ozma of Oz, etc etc. In the later ones, the true ruler of Oz appears, a girl called Ozma. She has complete power over Oz, and is completely beloved by all. One of the first things that she does is ban magic: no one can use any kind of magic unless they have her express permission.

For various Mary Sue reasons, no one has any issues with this, and everyone thinks she's great for suggesting it.

The Vizard of Az books were going to be written as thinly veiled political analogies, featuring an idiotic dictator who actually tried to ban magic. In the months leading up to November (the month of Nanowrimo, when I was going to write the first Az book) I started to write a backstory for the writer, Frankel. (I also put together a backstory for the dictator, and at my sister's request, her father.

November came around, and I realised that having written Frankel’s story, I didn’t actually feel motivated to write The Vizard of Az at all. There was no need for it; the story of Frankel was done, and actually writing the novel was suddenly superfluous. I still have all my notes for it, a couple of paragraphs of prose (including the opening) but the story didn’t need to be told. (instead, for my 2007 Nano novel, I attempted Basil Turret and the Prisoner of Algebra, a Harry Potter parody also set in All-That-Is.)

I have a couple of notes around about who is actually going to be writing The Traveller’s Guide to All-That-Is in-universe, but I’m not allowing myself to do anything with them, for fear that it will render the actual Guide superfluous.