Bechdel Test: A Million Ways to Die in the West 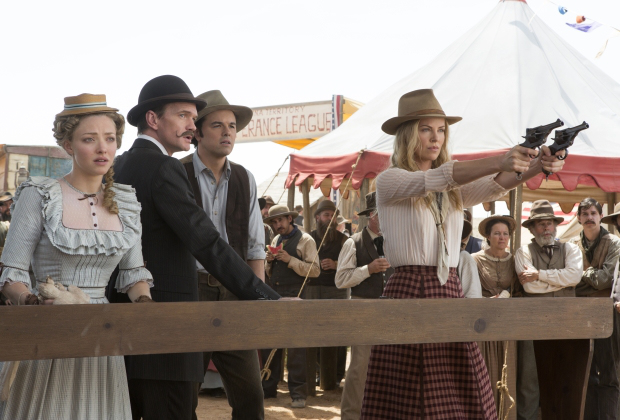 A Million Ways to Die in the West is the second live-action film from Seth MacFarlane, best known as the creator of Family Guy, American Dad, and The Cleveland Show – shows which pride themselves on their politically-incorrect humour.

Going into a Seth MacFarlane film expecting a feminist piece is a bad move.

The film fails the Bechdel Test. While there are three named women (in order of significance: Albert’s love interest Anna (Charlize Theron), his ex-girlfriend Louise (Amanda Seyfriend), and Ruth (Sarah Silverman), one of the town’s whores) none of them share any significant screen time – and on the rare occasion they have a conversation, it’s about Seth MacFarlane’s character, Albert Stark.

Seth MacFarlane voices the majority of well-known characters in his productions: Peter, Brian and Stewie Griffin, Quagmire, Stan Smith, Roger the Alien, Tim the Bear, and Ted from Ted. But this is his first major role in front of the camera – he doesn’t put on any mannerisms or even a voice, and simply plays himself.

He’s pleasant enough in the role, although it’s easy to get rubbed up the wrong way by every other character’s insistence that he’s such a great guy, especially considering that he both wrote their lines and directed their acting. In an open audition, Seth MacFarlane wouldn’t even have been in the top ten contenders, but his acting is far from offensively awful.

Despite the fact that two thirds of them exist for MacFarlane’s character to lust after, the female character aren’t too badly represented either. Louise is a two-dimensional, one-note character… but so is her new boyfriend, the moustache-twirling Foy (Neil Patrick Harris). Anna, however, is the most fleshed-out character in the film – or maybe Theron’s acting just makes her feel that way, when compared to MacFarlane.

A Million Ways to Die in the West certainly couldn’t be described as radically feminist, but it isn’t particularly sexist either.

Its quota for offensive jokes is mostly used on racial cracks, including a genuinely funny moment at the end of the film when Albert and Anna reveal (for the first time) how deeply racist they are… as would be typical of Americans in the late 1800s. It’s neither celebrated nor denounced, just humorously noted. Similarly, Sarah Silverman’s character is a sex worker – it’s certainly played for laughs, but the other characters treat her (and, to a certain extent, her profession) with respect.

Overall, it’s an awful-but-hilarious film. Despite a slow start, a forgettable main character and a half-hearted plot (good guy, bad guy, love triangle… it’s not even worth summarizing), there are enough laughs in the film to make it worth seeing. The celebrity cameos alone are almost worth the price of admission.

It’s not even remotely progressive, and watching it for the story is a bad idea, but when the gags hit, they’re hilarious, the visuals are pretty, and it’s fast-paced enough that you won’t get bored.

(This article was originally posted on July 17th, 2014 over at Illegitimate Theatre)