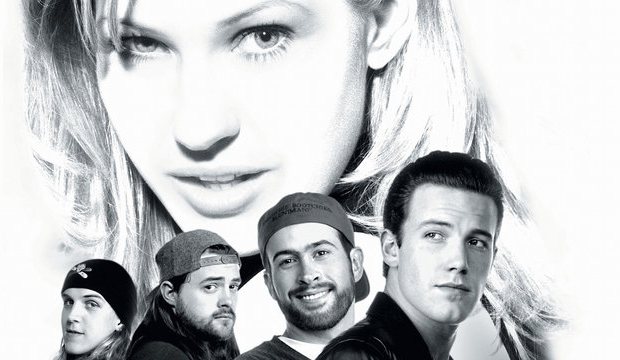 Chasing Amy is a 1997 rom-com written and directed by Kevin Smith. It deals, as many romantic comedies do, with a relationship between a man and a woman. The twist? She’s a lesbian.

The film was inspired by Smith learning that a lesbian who sleeps with a man is considered to be turning her back on her homosexual friends. And indeed, Alyssa (Joey Lauren Adams) has built her social life around her sexuality – when we see her coming out as straight (the word “bisexual” doesn’t appear once in the film) to her social circle, she’s met with the dismissive “Another one bites the dust”.

The first few lines of that scene fulfill all three requirements for the Bechdel Test: multiple women talking about something other than a man. The conversation quickly turns to men with Alyssa’s confession, but the Bechdel Test is (technically) fulfilled.

But is it a feminist film? Alyssa, from start to finish, has no plotline outside of her relationship with Holden (played by an early Ben Affleck). She definitely has hopes and dreams – and a career – but her entire past and present is important only as it relates to a man.

The same couldn’t be said about the male lead, Holden – he has a subplot involving his comic being turned into a TV show, and his friendship with Banky (played by an equally-early Jason Lee) is a central part of the film. Another main character, Hooper X (Dwight Ewell) is almost only seen in conversations with Holden or Banky.

So while the female lead’s relationships with other women are touched on – but mostly implied – any scene without her is about and featuring two or more men.

And in case you were wondering, the film passes the Reverse Bechdel Test less than thirty seconds in, while Alyssa’s coming-out scene takes place almost two-thirds of the way through. That in itself is problematic. When you add the stereotypical representation of the lesbian community… it’s far from perfect.

Despite this, it’s a good film. While it may not be the most strongly-feminist film in the world, it’s a 90’s film with multiple gay characters (who even converse, thus passing the Gay Bechdel Test), and it’s hard to find a mainstream movie that does a better job of exploring the fluidity of human sexuality.

Chasing Amy: a flawed but important movie, one that is definitely worth a watch.

Newer PostBechdel Test: The Wolf of Wall Street
Older Post An introduction to the Bechdel Test