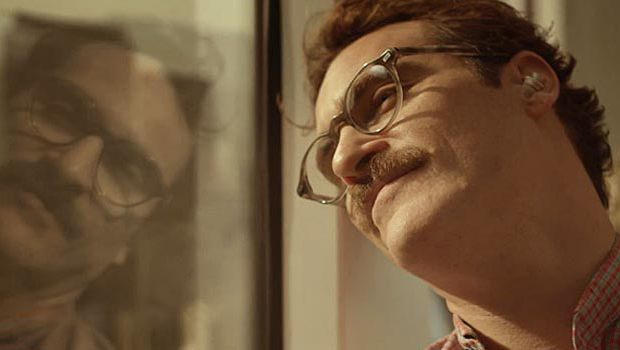 The Bechdel Test? That’s a whole other story.

Spike Jonze’s screenwriting debut is a beautiful tale of love and technology. It’s exquisitely shot, full of fascinating ideas, and audacious in the twists and turns that it takes – arguably too bold toward the end, but a film this courageous could never be satisfied with a simple, neat conclusion.

But does it pass the Bechdel Test? Well, that depends on how you define your terms. Two named “women”, having a conversation about something other than a man…

About halfway through the film, Sam (Scarlett Johansson) talks to Theodore’s god-daughter about the pretty dress that she’s wearing. It’s certainly a conversation, and it’s not about men, but is Sam a woman? She’s Theodore’s Operating System – she may be sentient, and she’s certainly female, but does she count as a “woman”?

Later in the film, Sam converses with Paul’s girlfriend Tatiana (Laura Kai Chen) about the human’s feet…and how sexy Paul finds them. The conversation drifts toward what life is like as an AI, but only when the men have rejoined them.

If you only count human women, the test fails only one of three tests – there are several human women, but none of them converse. If you count Artificial Intelligences who present and identify as female…but not children, the test fails again. And if you exclude conversations where a man is present, there’s certainly no conversation in the film that qualifies. We follow Theodore for the entire film and so every conversation we see, he’s there for.

Depending on your personal definitions, the film passes anywhere between 1 and 3 Bechdel questions. It’s still undeniably a feminist film, however, if for nothing more than its deconstruction of the Manic Pixie Dream Girl trope. The story is driven by the female characters, and their plots and relationships (unless specifically a romantic plot) don’t revolve around men.

Presenting a startlingly believable vision of the future, Her explores what it is to be in love and what it is to be a woman, even if you don’t have a body. Whether you believe it passes Bechdel or not, it’s a magnficent film, and entirely worth seeing.