In film, if you’re male, a protagonist, and you succeed at your goal, you get everything you’ve ever dreamed of… including a woman. It’s more obvious in fairy tales – “Slay the dragon and you may marry my daughter”, quoth the king – but its subtler form is still common in stories today. Look at the end of almost any Adam Sandler or Seth Rogan film; despite them almost always playing unattractive screw-ups, they inevitably end up with hot chicks way out of their league.

Slobs end up with business professionals who have their lives together who could model in their spare time.

This, it should be noted, is different to the storyline “two people meet, get along, and end up together.” Couples who bond over the course of the movie (even if it’s just a montage showing their compatibility) should absolutely end up together – but when the chemistry isn’t shown, or the obvious reasons they shouldn’t get together are ignored, women in the film are being treated not as people, but rewards to be won.

There’s many problems with this, of course: it portrays women as shallow, not wanting to date people they have a real connection with, but simply wanting the guy who has achieved the most. It teaches guys that they don’t have to worry about that tricky “getting along with people” nonsense – no, in order to attract a partner, all you have to do is go out and accomplish something. Women are a side-effect of success, trophies that are owed to you once you check off the right boxes.

The Lego Movie follows Emmet (Chris Pratt), who is repeatedly described as bland and unimaginative. He’s far from a bad guy – he’s brave, heroic and self-sacrificing – but no good reason is shown for Wyldstyle (Elizabeth Banks) to dump her boyfriend and end up with him instead.

Her boyfriend who is Batman.

An argument could be made that Emmet is the only one to see the “real her” – he insists on learning her “real name”, and not the one that she’s chosen for herself, but that hardly seems like behavior that deserves a relationship.

The pair also have a slow-motion moment of touching hands while music swells in the background… but for the rest of the film, Wyldstyle seems to get along far better with her boyfriend (who is Batman). They have common interests, they get along, and the one time he treats her badly, it turns out to be a ploy to save the day.

At the end, Batman gives his blessing to the new relationship. He’s totally fine with her dumping him to get with the hero, because… well, in place of a reason, the writers decided to go with a Dark Knight reference.

The film is silly, light, and genuinely hilarious, but where large sections of plot are deconstructed for laughs, this scene is thrown in there so that Emmet can “get the girl”. They’re not making fun of the trope, they’re just using it. It’s a disappointing moment in an otherwise great film.

Lego has had an interesting relationship with feminism over the years. In the ’80s, they had this ad: 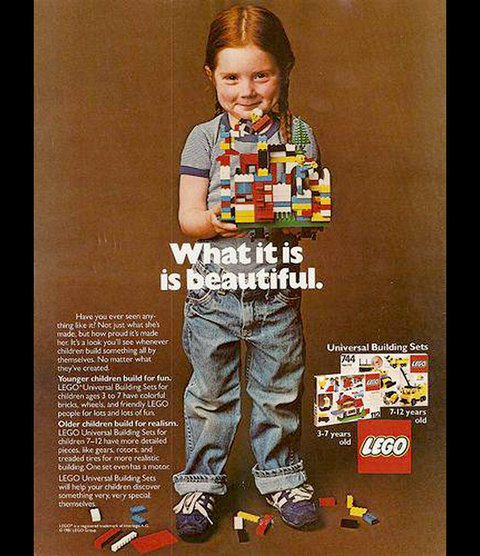 These days, they have separate “LEGO for Girls” – stick-thin lego characters with pink houses to go with it. Male Lego lines revolve around space, the jungle, adventuring…female lines focus on beauty salons and hanging out at the beach.

We meet about half a dozen female characters throughout The Lego Movie – the men are adventurers, wizards, superheroes… the women are love interests, pony/kitten hybrids, and a cameo appearance from Wonder Woman. All of the villain characters are male.

Bechdel Test time: While there are certainly more than two named female characters in the film, at no point do two of them have a conversation. At one point, about halfway through, one female character interrupts another (about something other than a man) – if you’re feeling particularly generous, you’re welcome to count that as a Bechdel pass.

The Lego Movie is a great film – well-written, perfectly cast, and full of memorable moments and hilarious one-liners. The whole film (with the exception of facial expressions) could really be built from Lego pieces, and it’s well deserving of the praise it’s getting. The directors (Phil Lord and Christopher Miller) know exactly what they’re doing

Whether you’re an old man or a young child, go and see the film. Everyone will get something out of it. Even if it’s just that important lesson: if you’re a guy and you accomplish your goal, disregard any other factors (including their current relationship status) and you’ll end up with the girl of your dreams.

(This movie was originally posted on April 8th, 2014 over at Illegitimate Theatre)