Bechdel Test: The Other Woman 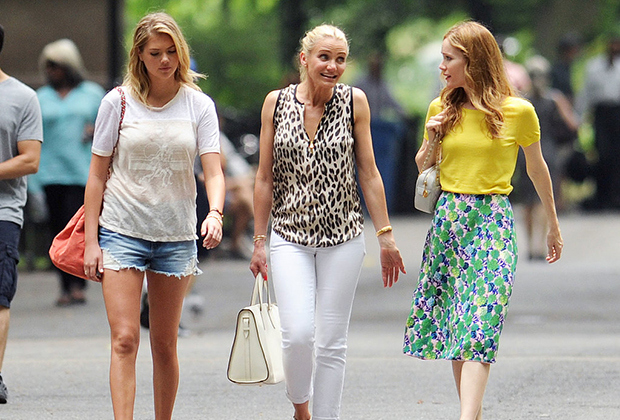 It was selected for this column due to claims it was a film starring three women that doesn’t ever manage to pass the Bechdel Test – the film has  been getting a barrage of negative criticism, the trailer is awful, and by all appearances, it looks like a collection of shrewish women plotting horrible revenge on a cheating man.

But that’s not what the film is about.

It does, admittedly, happen in the film. A group of women plot – and enact – revenge on the philandering Mark (Nikolaj Coster-Waldau – Jaime from Game of Thrones) – but that’s not what the film is about.

The Other Woman is about friendship – specifically, friendship between women who aren’t used to having female friends. It’s surprisingly fun (and, even more surprisingly, not misogynstic in the slightest).

Carly (Cameron Diaz) has just started dating Mark, when she learns that he’s married to Kate (Leslie Mann). The two women form an unlikely bond, and discover that Mark is also seeing Amber (Kate Upton), who is young and hot – everything they feel like they’re not.

Rather than treat her with ill-will, however, they quickly recruit her as an ally – and friend.

It’s a standard comedic trio – the organised one, the insecure one, and the ditz – that you rarely see played by three women. What’s even stranger about the film is that the only character in the film who doesn’t even have a hint of personality is the male lead.

Carly, Kate, Amber, and even Kate’s secretary (Nicki Minaj) are all believable and interesting characters. What’s more, they’re all funny. Leslie Mann gives her best performance to date, making the alternately confused and giddy wife into a fun character that you could watch for far longer than the film’s 109-minute run-time.

There are three male characters in the film – Kate’s brother (Taylor Kinney), Carly’s father (Don Johnson) and Mark. Again, atypically for a Hollywood film, they’re defined by their relationships to the female leads; while the film focuses on Mark, he exists purely to serve as a boyfriend, husband and cheater.

What’s more, the film is genuinely fun and funny. There’s one extended sequence that feels shoe-horned in – the majority of it made it to the trailer, and the plot would be stronger without it (giving the whole segment a hint of “executive meddling”) but if you can ignore the five-to-ten minutes of eye-rolling antics and agony, it’s one of the strongest comedies released this year.

The Other Woman passes both the Bechdel and Reverse Bechdel Test. The vast majority of conversations in the film, however, are between the women – many of them are about Mark, obviously, but they also discuss other things: sweat (as seen in the trailer), shaving (admittedly in the context of of sex with a man), dogs, smoking, drinking, but more than anything friendship.

Because no matter how you spin it, that’s what the film is about. Women and their friendships. In this film, they start from a weird place, but the bonds soon prove to be both genuine and important.

Interestingly, it barely scrapes a Reverse Bechdel. There’s only one conversation between two men, where (after discussing ex-wives and new girlfriends) the topic briefly turns to business for just a few lines.

But the film’s theme is female friendships. It arises in reaction to a man’s actions, true, but Mark isn’t a character – he’s a plot-point. He’s an obstacle to be overcome, relevant solely in how he affects the relationships between the women. He’s a one-dimensional caricature that the film makes clear is only found attractive because he’s aesthetically appealing: exactly the complaint many have about women in gender-flipped roles.

The Other Woman is an odd sort of progress, but it’s definitely progress.

(This article was originally posted on the 20th of June, 2014 over at Illegitimate Theatre.)