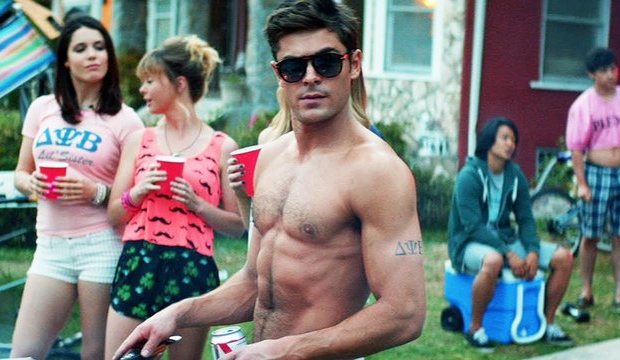 Bad Neighbours (simply Neighbors in the US, a vastly inferior title) contains plenty of topless women, but not so much in the way of bottomless men. And with one exception, the tits aren’t there for reasons of plot or as part of a joke.

They’re decoration: men like tits, and men are going to be watching the film, so why not give them tits?

After all, topless women are sexy, but not pornographic; lewd, but not offensive. If a film-maker wants to appeal to men but not put women off, they just have to add a few topless women to their film. Websites like Mr Skin (Wikipedia link) document the practice – type in any actress’s name, you can find which films she’s appeared nude or topless in.

Whether or not this practice objectifies women is an issue that deserves more room than this column can give it. But in short, when you’re stripping women just to appeal to men, yeah – that’s basically the definition of objectification.

Of course, breasts aren’t inherently sexual either, so perhaps that’s as close to equivalency as we’re going to get.

No. Though it does get close, it fails at step three – two women having a conversation about somethingother than a man.

There’s four adult female characters of note: Paula (Carla Gallo), whose role in the film is to be divorced and crazy; Brooke (Halston Sage) whose entirely personality is that she’s hot and stupid, the Dean (Lisa Kudrow), who exists as an irrational obstacle, and Kelly (Rose Byrne), arguably the most interesting female character we’ve seen in a comedy film since Bridesmaids.

In one of the film’s best sequences, she discusses how ridiculous and insulting the idea is that she has to be the sensible one just because she’s a woman. Not in a preachy way, not in a boring way – she’s complaining that she wants to be the stupid one, and that her husband should be the one to grow up and stop her.

Kelly gets drunk, she gets high, she comes up with schemes and she’s vital in implementing them. No one is going to give this film any awards for well-fleshed out characters, but as well as actually being actively involved in the plot, Kelly gets much closer to being a three-dimensional character than any of the men in the movie. Her being a wife and mother is important, but only because the plot literally couldn’t occur without it – just as much focus is given to the fact Mac (Seth Rogen) is a father and husband.

For all Kelly’s strengths, however, she never talks one-on-one with another female character. There’s a scene where she chats to three sorority sisters… about how she met her husband. And she talks to Paula about going out clubbing, but Mac’s in the conversation as much (or more) than her. Even if it slides by on a technicality, it fails the spirit of the test.

This is a film about a couple going to war with a frat house. Fraternities consist (by definition) of males, and making both sides of the couple women would change the tone of the war completely. It’s a plot that inherently requires a mostly-male cast.

The problem isn’t that some stories require more men then women. The problem is that those seem to be the majority of the stories people want to make – but Bad Neighbours is a symptom of that problem, not the cause.

Feminism aside, Bad Neighbours is well-cast, well-acted, and consistently hilarious throughout. The plot is paper-thin, but not clumsily so – like it was purposefully written for the amusing moments and nothing else. Each character is given an emotional arc, but again, only because of the amusing moments they lead to.

If you’re after a deeply feminist movie, give this one a miss.

And if you’re looking for something with depth, plot, or any kind of real-world logic, stay far far away.

(This article was originally posted on May 19th, 2014 over at Illegitimate Theatre)